Dear visitors, let me take this opportunity to guide you on this website to some of the most important places of Egypt, until you come to let your soul and mind enjoy them all by yourself.

The word "Pharaoh" comes from the two ancient hieroglyphic words PR and AA, which both mean "The great house". It is indeed great, that the ancient writings of the Pharaonic times can now be read and understood. It was Jan-Françoise Champollion, who finally succeeded in 1822 in translating the famous stone of Rosette, which is now being displayed in the British Museum in London. 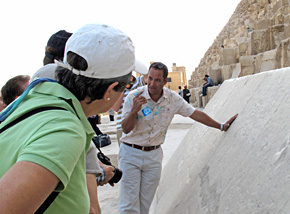 History to touch. Ossama takes care of leading his guests as close as possible to the ancient culture and helping them to understand it, for example here at the great pyramids of Gizeh.

Our tour starts in Cairo, where the pyramids and sphinx of Giza are located, as well as the oldest official necropolis (cemetery) of the old Kingdom Sakkara (about 2.700 B.C.). You will also find the oldest stone construction on earth: The step-Pyramid complex and, of course, the old Egyptian Museum on the famous Tahrir Square. Soon there will also be a new grand Egyptian Museum.

Travelling to the south of Cairo you will find the ancient remains of middle-Egypt - the important capital of the famous King Akhenaton, where the famous bust of his wife queen Nofertiti was discovered, as well as the middle-kingdom rock tombs in Beni-Hassan, and the early Greek monuments in Tuna Elgabal. We go further to the south, where we stop in Sohag-Abydos to visit the interesting temple of Osiris, then further on to the Hathor temple in Qena. Finally we reach Luxor, which is also known as Thebes. 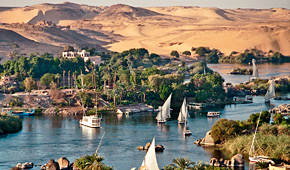 The picturesque river Nile in Aswan, often used as scenery for famous movies.

In Luxor, take your time and enjoy a wonderful discovery tour. There are nice hotels to stay and we can explore many ancient pharaonic sites. Almost 70% of the best preserved pharaonic monuments can be found in Luxor. On the eastern side of the river Nile the great temples of Karnak and Luxor, then the West-bank with the valley of the kings, queens, nobles and workers, as well as the important mortuary temples of several kings and queens like Hatshepsut, Ramses II and III, Sehti I and so on …

There is more to see in the south of Luxor: the temple of Khnum in Esna, in Edfu Horus and in Kom-Ombo Sobek. Finally we reach Nubian and the city Aswan. Here you can explore the beautiful temple of Isis on an idyllic island, and the Nile’s first cataract. Another highlight is located in the very south of Egypt – the unique rock temples of Ramses II in Abu-Simbel.